Ok, so I'm not the best or most regular blogger...

I used to do the same thing with my diaries, growing up. I'd write in my diary like mad for a month or two, at least once a day, sometimes twice, and then I'd stop, the next entry dated more than a month later. On a side note, I've decided to downsize and move. I've been decluttering in preparation for the move and found my diaries from when I was a teenager. Boy, was I ever a drama queen. And long-winded. And prone to going off on wild tangents. Anyways...

So it’s been almost five months to the day since my last entry. I went back to work after the Mirabilia Retreat and barely surfaced until the end of June. There were a great many days where I worked past midnight, very long days where focus and attention to detail were crucial and exhausting. Summer came, and with it an unending cold. Huh, who knew Mom was right when she said I’d get sick if I didn’t take better care of myself? And here we are. At least lying in bed for a good part of the summer gave me lots of time to think and make a decision about my life and what I want out of it, which leads back to moving (less house to clean, no yard work and much, much less shoveling snow), trying to attend more stitching retreats and travelling again (Scotland, Summer 2014!).

But you didn’t come here to listen to my ramblings about life. Remember the comment above about being long-winded – that apparently hasn’t changed, and I could go on and on and on, but this is a stitching blog. And I actually have gotten in quite a bit of stitching since my last post.  I’ve grouped things together instead of going chronologically.


Mirabilia Large Stitch Round Robins
We’re nearing the end already! I stitched Dreamer on Andie’s RR (see pics below). This was never a pattern I thought of stitching so I thought it’d be a great opportunity. When I pulled the flosses, I really thought it’d be a dull coloured piece, but instead they were so very rich and lush together. Andie’s fabric, Midsummer Night 32 ct. opalescent Belfast linen from Under the Seas, was a great background for this one. 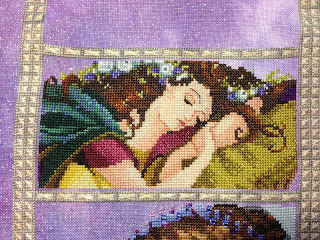 I also stitched on one of Karen's older RRs. One of the stitchers wasn't able to stitch her part, so I volunteered to help out. I stitched Sweet Pea, which is one of my favourite pixies to date and definitely on my to do list now. 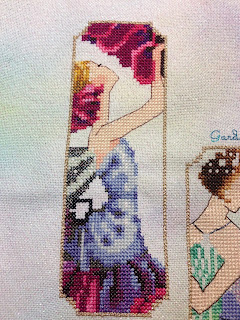 I’m currently stitching my last square for this RR, July’s Amethyst Fairy for Jo. I’m almost done, but I’d really like Jo to be the first one to see it so I won’t be showing pics until Jo has received it :)
Joan Elliott Round Robin
I posted a preview of my own RR layout way back in February, but only got around to stitching it in May, just in time to make the mailing deadline, although I didn’t quite have enough time to do all of the backstitching, beading and swearing as I tried to do the French knots. The expression at the top is a Japanese proverb which basically means that imagination is awesome. Thank you, Google! I’ve stitched a small iris at each corner – this is from the fan of one of the Geishas in Joan’s Oriental Odyssey book. I also used one of the Geishas from the book to replace the top middle Geisha that I wasn’t too crazy about. I stitched Golden Buddha myself and them mailed him off to Kaye in Australia. The fabric is Dreamer 28 ct. Jobelan from Hand Dyed Fabrics by Steph. 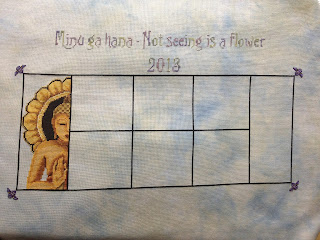 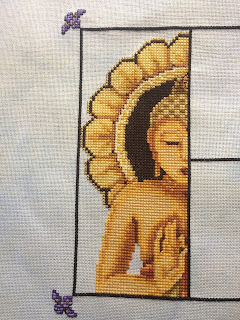 ﻿
This is a pic I’ve borrowed from Ginny’s blog – she just finished stitching the Geisha on the bottom right, with the orange background (there's a great close up on Ginny's blog). Kaye and Karen stitched the other two Geishas. I just about squealed when I saw Ginny’s pic earlier today. I am so in love with this RR and can’t wait for it to come home! 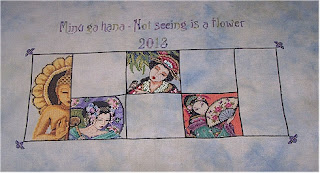 In the meantime, I stitched Lily Fairy for Rachel’s RR and Rose Fairy for Deb’s RR. 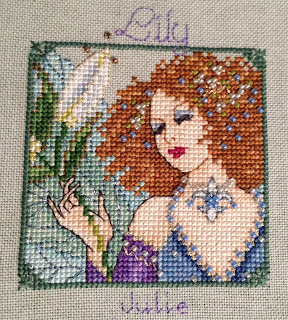 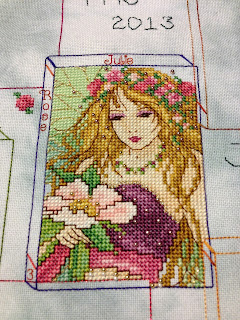 My own stitching
I have some finishes!!!
I stitched Summer Faerie Love this summer, one of the newer Mirabilia patterns. It was love at first sight – the teals, the greens, the attitude. I had to stitch her! I chose Tarnished Silver from Under the Seas, on 28 ct. opalescent Lugana, and it really was the right choice! The opalescent fibres really brought out the shine in the beads and her wings, and the light grey colour let the colours of her dress shine. Plus, honestly, it’s been a pretty grey summer here this year, so I thought it was particularly appropriate. I made a few changes to her face, using DMC 632 rather than the dark grey called for for the backstitching, and giving her an open eye. I may eventually change it further, but for now, I find her quite lovely. 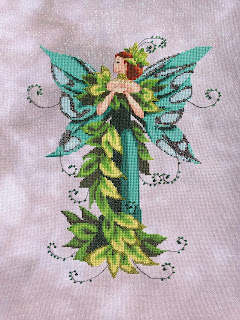 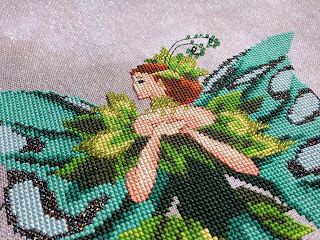 And this is Buttercup Pixie, also from Nora Corbett, finished tonight. I had a blast picking fabric for her from my pretty extensive stash, with help from Lynne, a fellow stitcher from New Zealand and Facebook friend. I dragged out dozens of fabrics from my stash one sunny Saturday morning as we messaged back and forth, yay-ing and nay-ing various fabbies. This is the one we both agreed was best, a Limited Edition from Polstitches, Lust and Laughter, on 28 ct. Jobelan. I’m not usually a fan of yellows and oranges, but I had so much fun stitching this one. The colours were just so bright and happy they made me smile whenever I picked her up. She's also very beady - there's a pack and a half of the light yellow beads on this piece. 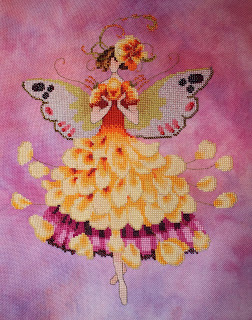 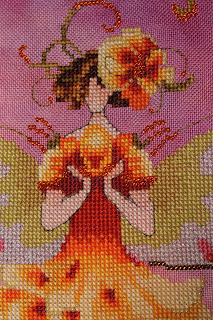 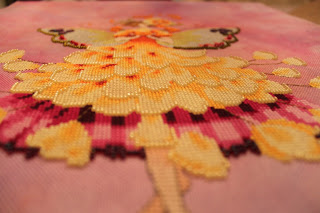 I’ve also stitched some more, here and there, on both Siren and the Shipwreck and Gypsy Mermaid. I really do love them both so much. I can't wait until I finish and mail the two RRs I currently have so these ladies can get a bit of stitching time. 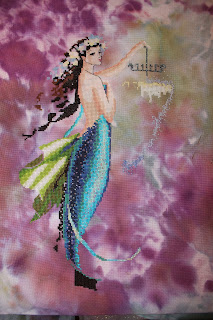 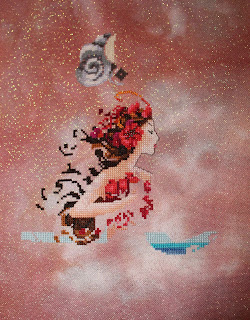 The rest of my WIPs didn’t get any lovin’ but I’m thinking it might be time to change that, especially the Chatelaines. Well, after the RRs, my mermaids and the move.
Happy stitching everyone, and thanks for sticking with me, despite the irregular posts :)

Julie
Welcome to my red couch! My name is Julie, I’m 34 years old and, well, I love cross stitching, sitting on my red couch. I'm constantly amazed to discover all of the amazing fabrics, fibres, designers and stitchers out there. I also enjoy gardening, photography, reading and spending time with my two adorable nieces. I live in Canada, just outside the Nation’s Capital, with little Bart the Pomeranian.